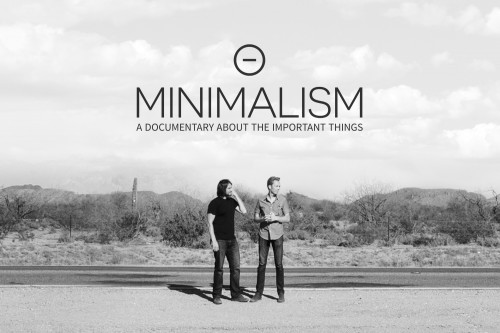 Whilst catching up on my couch time recently, a documentary on NetFlix called Minimalism: A Documentary caught my eye. I started to watch and surprisingly I made it all the way to the end, which is pretty good for me. Its a thought provoking film that challenges some fundamental values in our very consumerist modern society.

The film looks inside the lives of minimalists from all walks of life – families, entrepreneurs, architects, artists, journalists, scientists, and even a former Wall Street broker-all of whom are striving to live a meaningful life with less. The central plot though, follows the two main characters, Josh and Ryan as they travel the country on their book tour to spread the word of minimalism. They have a blog and podcast by the way which is probably a better introduction into their movement.

To get some of the criticisms out of the way, the movie was too long, it tended to repeat itself and it just seemed to focus on the wrong things. A book tour?! Are they trying to promote a life of less or are they trying to sell us their book??

But these negatives miss the point, the film isn’t supposed to give you a plan for how to live like a minimalist. It’s a documentary made for people who haven’t heard much of anything on the topic. If people are open to it, it can serve as a great wake up call. People everywhere should give it a try, it’s an easy introduction to the topic and should hopefully prompt people to look at their lives and see what alternatives there are. At the very least it will make people think twice about their spending habits, which after all, is exactly what we want too!