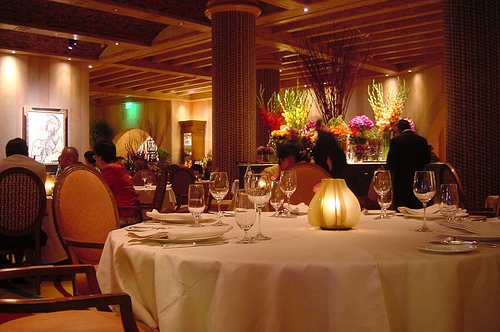 We’ve wrapped up our one-month challenge of cutting back on dining out. So how did we do? Surprisingly, it went a lot better than I expected it to! Typically, we would budget about $350 to $400 per month for “restaurant expenses”, which included everything from coffee stops, to fast food, to drinks with friends (and everything in between) for two people (or two and a half, if you count the peanut?). We were able to save about $200 throughout the month of January by cutting back and not cutting out completely, which is at least half of what we would have normally allowed ourselves to spend. The best part? By cutting back instead of eliminating altogether, it made it feel like we could still go out and enjoy ourselves, but it made us more conscious of what we were spending and how often we were spending it. It didn’t feel like we were frugal hermits hiding in our house with canned goods.

I’d also like to think it made us healthier (or at least I felt that way) because we put a more conscious effort into the food we were preparing at home. We planned ahead and grocery shopped for what we needed, and we chose recipes that incorporated more whole, healthy ingredients, which can often cost less than buying pre-made, processed foods.

So what exactly did we do? What changes did we end up making? We limited ourselves to two meals outside of the house per week, one typically being during the week, and one on Friday. We also allowed ourselves each about $10 to $20 to “free spend” on treats or drinks throughout the week, which came in handy if I accidentally forgot to pack snacks for my workday. For the other days, we prepared 2 or 3 meals at home – breakfast, lunch, and dinner, depending on how hungry we were and what we had left over. Since this pregnancy has left me feeling pretty drained, the hubby stepped in and came up with some great, simple recipes that we could make quickly and cheaply – we didn’t have to sacrifice time or money for flavor! I was surprised to find it was fairly easy to get into this habit, especially when we would cook together. Dividing up tasks made meal prep go quicker, and it allowed us to spend a little extra time together.

Have we continued with our changes into February? While I would have most definitely loved to have continued on our streak, it’s been extra difficult due to scheduling conflicts that require us to be out of the house late a few times per week, which makes it near impossible to even get home after work, let alone prepare a meal. Luckily, the extra money we saved has come in handy in helping to cover these extra costs, and it doesn’t look like we’ll go over our typically monthly budget for dining out. Once our schedules get back to normal next week, we’re planning on going right back to where we left off. While we enjoy going out, and we feel lucky to have some of the freedom our budget allows with more random, frivolous purchases (a.k.a. stopping for Starbucks whenever we want), our priority right now is saving more money, so our ultimate goal is to try our best to carry this challenge over to the remaining months of the year.

What part(s) of your budget do you have the most trouble with? Can you find ways to cut back on your spending without sacrificing altogether? Think of ways to apply this challenge to other spending areas!